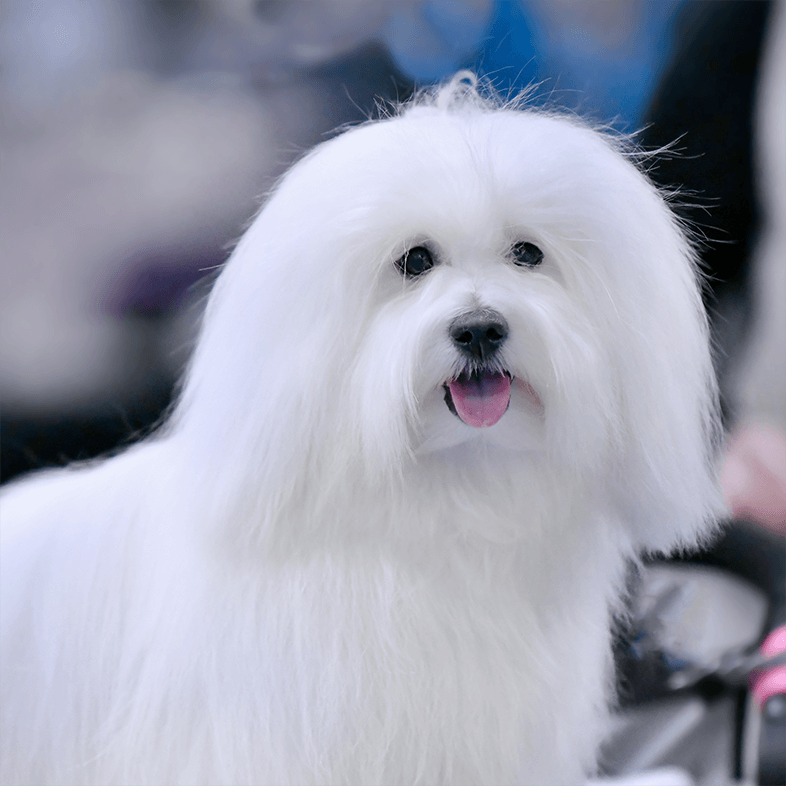 BRIEF HISTORICAL SUMMARY: Introduced to France long before its official recognition in 1970, this newcomer from Madagascar quickly acquired a prominent position amongst the companion dogs of this country; today it is widespread all over the world.

BEHAVIOUR / TEMPERAMENT: Of a happy temperament, stable, very sociable with humans and with other dogs; it adapts perfectly to all ways of life. The temperament of the Coton de Tuléar is one of the main characteristics of the breed.

HEAD: Short, seen from above triangular.

FACIAL REGION:
Nose: In the extension of the nasal bridge; black; brown is tolerated; nostrils wide open.
Muzzle: Straight.
Lips: Fine, tight, of the same colour as the nose.
Jaws/Teeth: Teeth well aligned. Scissor bite, pincer bite or inverted bite without losing contact. The absence of the PM1 is not penalised; the M3s are not taken into consideration.
Cheeks: Lean.

EYES: Rather rounded, dark, lively, wide apart; the rims of the eyelids are well pigmented with black or brown according to the colour of the nose.

TAIL: Low set, in the axis of the spinal column.
• At rest: carried below the hock, the tip being raised.
• On the move: Carried « gaily » curved over the back, with the point towards the nape, the withers, the back or the loin. In dogs with abundant coat, the tip may rest on the dorsal-lumbar region.

FOREQUARTERS:
General appearance: The frontlegs are upright.
Shoulder and upper arm: Oblique shoulder, muscled. Scapulo-humeral angle about 120°. The length of the upper arm corresponds approximatively to that of the shoulder blade.
Lower arm: Lower arms vertical and parallel, well muscled, with good bone. The length of the lower arm corresponds approximatively to that of the upper arm.
Carpus (Pastern joint): A continuation of the line of the lower arm.
Metacarpals (Pastern): Strong, seen in profile sloping very slightly.
Forefeet: Small, round, toes tight, arched; pads pigmented.

HINDQUARTERS:
General appearance: The hindlegs are upright. Though dewclaws are not sought after, their presence is not penalised.
Upper thigh: Strongly muscled; coxo-femoral angle about 80°.
Lower thigh: Oblique, forming with the femur an angle of about 120°.
Hock joint: Dry, well defined, angle of the hock about 160°.
Metatarsals (Rear pasterns): Vertical.
Hind feet: Similar to forefeet.

GAIT / MOVEMENT : Free and flowing, without covering a lot of ground; topline retained on the move. No sign of uneven movement.

SKIN: Fine, stretched tight over all the body; although of pink colour, it can be pigmented.

COAT
Hair: This is one of the main characteristics of the breed from which its very name derives. Very soft and supple, with the texture of cotton, never hard or rough, the coat is dense, profuse and can be very slightly wavy.
Colour: Ground colour: White. A few slight shadings of light grey colour (mixture of white and black hairs) or of red-roan (mixture of white and fawn hairs), are permitted on the ears. On the other parts of the body, such shadings can be tolerated, if they do not alter the general appearance of white coat. They are however not sought after.

FAULTS : Any departure from the foregoing points should be considered a fault and the seriousness with which the fault should be regarded should be in exact proportion to its degree and its effect upon the health and welfare of the dog.

General type:
• Lack of type (insufficient breed characteristics which means that the animal on the whole does not sufficiently resemble other examples of the breed).
• Size and weight outside the requirements and tolerance of the standard.

Anomalies:
• Overshot or undershot mouth with lack of contact between the incisors; vertical gaping of the incisors.
• Absence of teeth other than the PM1 or the M3s.
• Aggressive or extremely shy specimen.

N.B.:
• Male animals should have two apparently normal testicles fully descended into the scrotum.
• Only functionally and clinically healthy dogs, with breed typical conformation should be used for breeding.