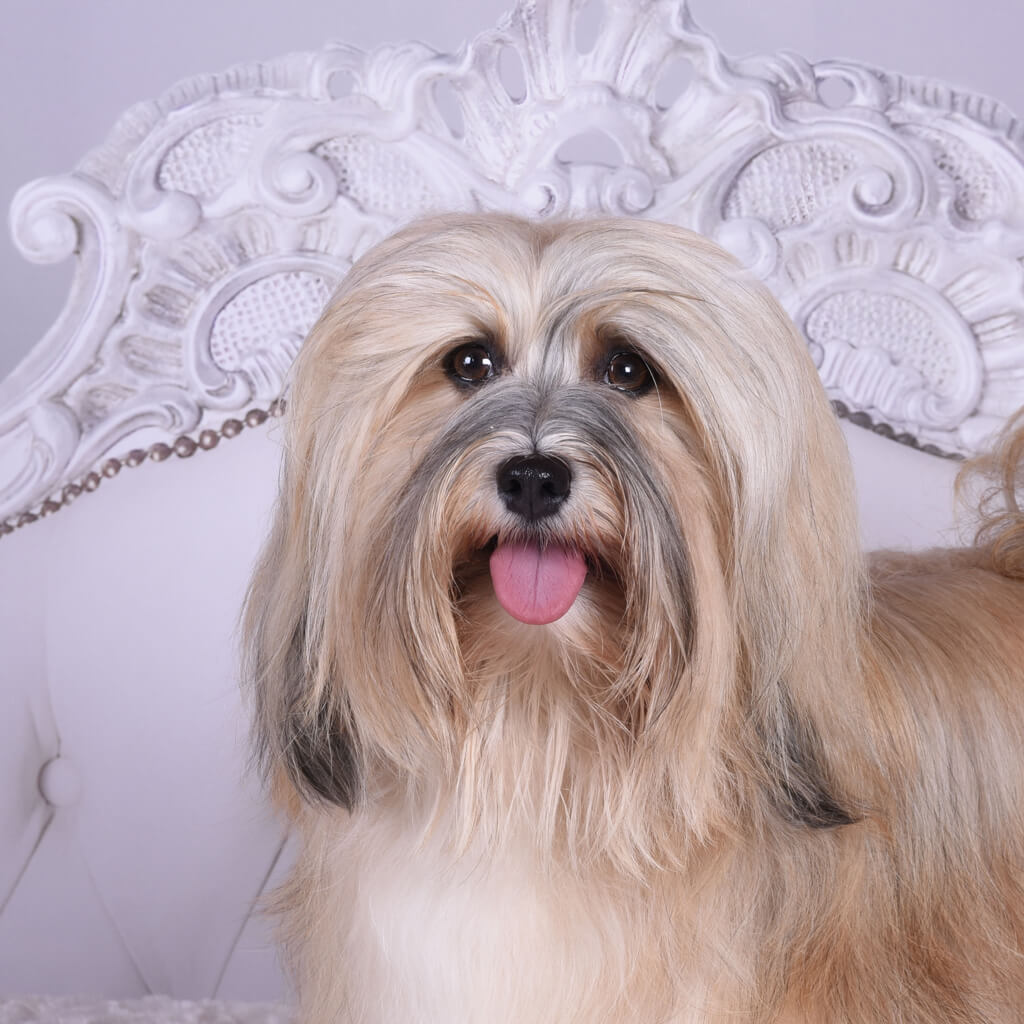 BRIEF HISTORICAL SUMMARY: The breed comes from the Western Mediterranean region and has developed along the Spanish and Italian coastal region. It would seem that these dogs were imported early in Cuba by ocean navigating Italian captains. Erroneously, the most frequent brown colour of these dogs (tobacco) gave birth to the legend which would mean it to be a breed originating from Havana, capital of Cuba. The political events however have led to the total disappearance of the old blood lines of the Havanese in Cuba; apparently a few dogs could be successfully smuggled out from Cuba; their descendants have survived in the U.S.A.

GENERAL APPEARANCE: The Havanese is a sturdy little dog, low on his legs, with long abundant hair, soft and preferably wavy. His movement is lively and elastic.

BEHAVIOUR / TEMPERAMENT: Exceptionally bright he is easy to train as alarm dog. Affectionate, of a happy nature, he is amiable, a charmer, playful and even a bit of a clown. He loves children and plays endlessly with them.

HEAD: Of medium length, the relation between the length of the head and that of the trunk (measured from the withers to the base of the tail) is of 3/7.

CRANIAL REGION:
Skull: Flat to very slightly rounded, broad; forehead hardly rising; seen from above it is rounded at the back and almost straight and square on the other three sides.
Stop: Moderately marked.

FACIAL REGION:
Nose: Black or brown.
Muzzle: Narrowing progressively and slightly towards the nose but neither snipey nor truncated.
Lips: Fine, lean, tight.
Jaws/Teeth: Scissor bite. A complete dentition is desirable. The absence of premolars 1 (PM1) and molars 3 (M3) is tolerated.
Cheeks: Very flat, not prominent.

EYES: Quite big, almond shape, of brown colour as dark as possible. Kind expression. The eyes rims must be dark brown to black.

EARS: Set relatively high; they fall along the cheeks forming a discreet fold which raises them slightly. Their extremity is in a lightly rounded point. They are covered with hair in long fringes. Neither propeller ears (sticking sideways), nor stuck to the cheeks.

BODY: The length of the body is slightly superior to that of the height at the withers.
Back: Topline straight, slightly arched over the loin.
Croup: Noticeably inclined.
Ribs: Well sprung.
Underline and belly: Well tucked up.

TAIL: Carried high, either in shape of a crozier or preferably rolled over the back; it is furnished with feathering of long silky hair.

GAIT / MOVEMENT: According to his happy nature, the Havanese has a strikingly light-footed and elastic gait; forelegs with free stride and pointing straight forward, the hindlegs giving them the impulsion and moving in a straight line.

COAT
Hair: Undercoat woolly and not very developed; it is often totally absent. The topcoat is very long (12-18 cm in an adult dog), soft, flat or wavy and may form curly strands. All grooming, the usage of scissors to even out the length of the coat and all trimming is forbidden.
Exception: tidying up the hair on the feet is permitted, the hair on the forehead may be slightly shortened so that it does not cover the eyes and the hair on the muzzle may be slightly tidied up, but it is preferable to leave it in natural length.
Colour:
Rarely completely pure white, fawn in its different shades (slight blackened overlay admitted), black, havana-brown, tobacco colour, reddish-brown. Patches in mentioned colours allowed.
Tan markings in all nuances permitted.

FAULTS: Any departure from the foregoing points should be considered a fault and the seriousness with which the fault should be regarded should be in exact proportion to its degree and its effect upon the health and welfare of the dog.

DISQUALIFYING FAULTS:
• Aggressive or overly shy.
• Any dog clearly showing physical or behavioural abnormalities.
• Depigmented nose.
• Upper or lower prognathism.
• Ectropion, entropion; rim of eyelids of one or both eyes depigmented.
• Size over or under the indicated norms of the standard.